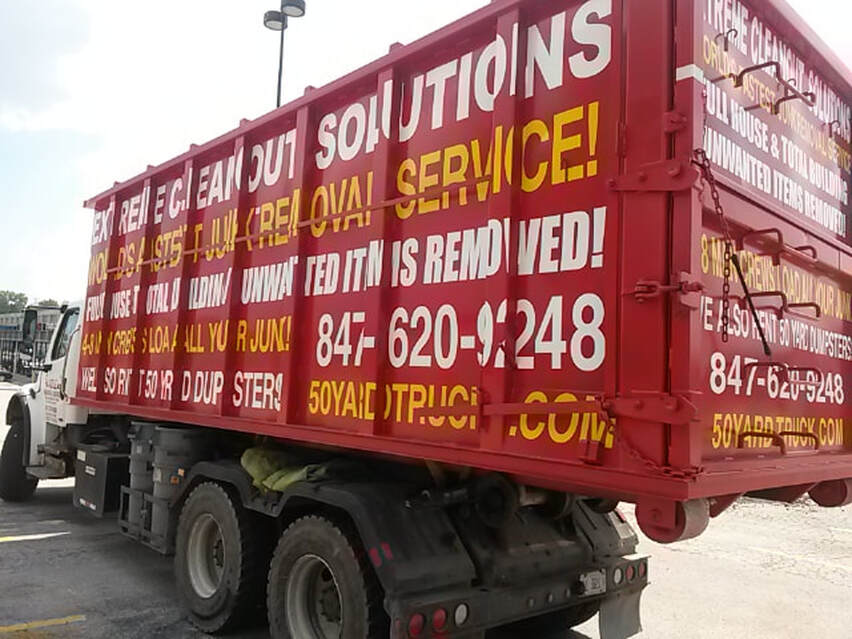 Check out some of our customer reviews:
"We recently purchased a home that was a disaster due to the previous owner's hoarding and construction debris. After calling one of the well known 1-800 chains, they showed up, looked around and quoted us over $13,000!  Umm.. no.

I called Paul at Extreme Cleanout Solutions and he was friendly and arranged a pick up in a couple days. His crew even showed up 20 minutes early and were all easy going and super hard working guys. I was exhausted just watching them go. They filled up an entire giant truck, and there was NO empty space left in that truck. They carried off the old furniture AND cleaned out old rotting wood and pallets strewn about as well as a nasty collection of old paint cans, and rotting construction junk.
All in all it was 1 (Super packed full) truck and 1/2 of another that cost me $4000, under a QUARTER of the 1-800-Got-"small truck" guys were asking."

"Absolutely awesome company!!
Paul and his crew can handle even the most difficult of situations, do so cheerfully,without making judgement, work non stop and go the extra mile to help.
The truck is the biggest around and they know how to pack it to utilize every square inch of space.
Very quick to respond and the price is a better than fair for the truck size and the fantastic hard working crew.
I wish I could give 100 stars because Paul and his crew deserve it. They are fantastic and a blessing to those in need of this type of service.."

"Extreme Cleanout Solutions was amazing!!  Very quick to respond--within 3 days of calling for an appt--and that was due to my schedule.  7 guys and a truck showed up ON TIME (actually a little early---which was awesome!!). They completely cleaned out my 3 bedroom, 1 1/2 bathroom, kitchen, family room and several closets!  Oh--and my garage!!  Truth be told I WAS quite a pack rat!!  All in 2 hours!  They even swept up afterwards!  Can't say enough about them (in a positive way!!). All of them were super nice and friendly---not creepy AT ALL!  . I would use them again!!"

"My parents both passed away and I had to sell the house.  Since I live out of state it made the most sense, financially, just to junk everything all at once rather than flying back and forth trying to sell stuff.  These guys were great.  Took 7 guys about 3 hours to clean out a 1300 sq ft house plus basement and a 3 car garage!  While they couldn't get everything in one load they did not charge me for two full loads.  No damage to the interior of the house either.  They were even concerned that I was junking family photo albums and asked if I was sure they should go.  Since there was no one left to tell me who the people were I said yes.  I would hire them again if the need ever arose again. It was well worth the money spent."

"Devine intervention (and the internet) brought Paul to my rescue.  I was at the hospital with my brother and his wife, who was minutes away from having brain cancer, when the call came in that their house was deemed "Unfit For Human Occupancy" .  I drove to the condo and opened the door and was hit with a thick indescribable order that you could literally see.  Waist high "junk" everywhere.  I left after retrieving what I could find, of their important papers.  I had absolutely no clue where to start.  I looked on the internet and just happened to come across Extreme Cleanout Solutions.  Paul was very understanding, explained all their different services and pricing.  I opted for the complete cleanout. We set it up for a weekend and it took two 50 yard dumpsters.  We showed up an hour early and they were already there.  There were six men doing the clean out and one guy inside the dumpster packing it in tightly.  The condo was 1200 square feet.  On Saturday they emptied half and came back Sunday and packed the rest in.  They took appliances, furniture, and even the cabinets and sinks.  TVs, tires and computer monitors cost per disposal, but you'd pay that to get rid of it yourself.  I got a handful of business cards to pass out to anyone I know who finds themselves in this situation.  When you're standing in knee deep of junk and don't know what to do...Call EXTREME CLEANOUT SOLUTIONS !!!  You wont regret it."

"My 95 year old father passed away and I had a week to empty out his 1 bedroom apartment.  After gathering up all of his photos and "treasures" he had accumulated I called Extreme Cleanout Solutions.   Paul was excellent to work with,  he explained his services I was able to schedule within 3 days and he showed up on time (even earlier than scheduled) had a professional crew and 45 minutes later the apartment was completely cleaned out. I was able to take a very stressful situation and turn it into a positive one thanks to Extreme Cleanout Solutions!   Thank you so much!!"

"My aunt passed away recently, and in order to sell the house, we needed to clear it out. She was a bit of a hoarder, so this was a large and overwhelming job for those of us trying to help. My mom hired Extreme Cleanout Solutions to help load 2 portable storage containers, organize donation piles, and remove junk. We all thought with the amount of stuff to move/go through, it would take 6 hours, but this group muscled through and got it all done in four. There was a group of 8 men who worked extremely hard and efficiently. They helped determine which pieces may not be accepted by donation locations and were extremely mindful in how they loaded all the furniture and keepsakes into the storage containers. At first we were worried about just throwing so much stuff away, in case it could be recycled or donated, but they reassured us that anything put in their dumpster gets sorted and as much as possible gets recycled. By the end of the 4 hours, they had completely filled their 50 yard dumpster. We'd recommend them time and time again to anyone who needs this type of service."

"The company cleared out a hoarder house in Aurora Illinois. This house was piled up with trash 5 feet high on the main floor,  basement, and the garage They brought a 10 man crew and finished everything in 2 days. Their truck is an enormous 50 cubic yard dumpster! The total amount of garbage removed was 200 cubic yards in just 2 days! They are highly recommended for large junk removal jobs!"

The company cleaned out our late Grand Father’s 3 bedroom condo on the 7th floor of a hi rise building in the Hyde Park neighborhood of Chicago. He was a real Pack Rat and the unit was just filled with boxes, newspapers, and trash. We expected the job to take several days because there was a huge amount of debris and it was a long walk from the basement parking garage to the alley. Extreme Cleanout Solutions showed up on time each day with their 24 foot truck and a 10 man crew and completed the whole job in just 2 days. The work ethic of the crew was just amazing. They did a very difficult job for us and we really appreciated their help! Thank you!


My family used Extreme Cleanout Solutions to remove all the junk and garbage left by a hoarder tenant that we evicted from our 3 flat building in Chicago. The work was completed much faster than we expected. The 3 bedroom apartment was filled around 5 feet high with trash and it looked like one of those hoarder TV shows. It took just 2 days for their 9 man crew to load 4-50 yard dumpsters. The guys were very efficient and hard working. They worked like an assembly line. They packed their truck really well and even left the metal items in the alley for the scrap metal hauler. If you have need of cleaning out a hoarder house or a large amount of junk to remove these guys are very good at it. They have a 50 cubic yard truck and they bring a lot of movers to load everything.